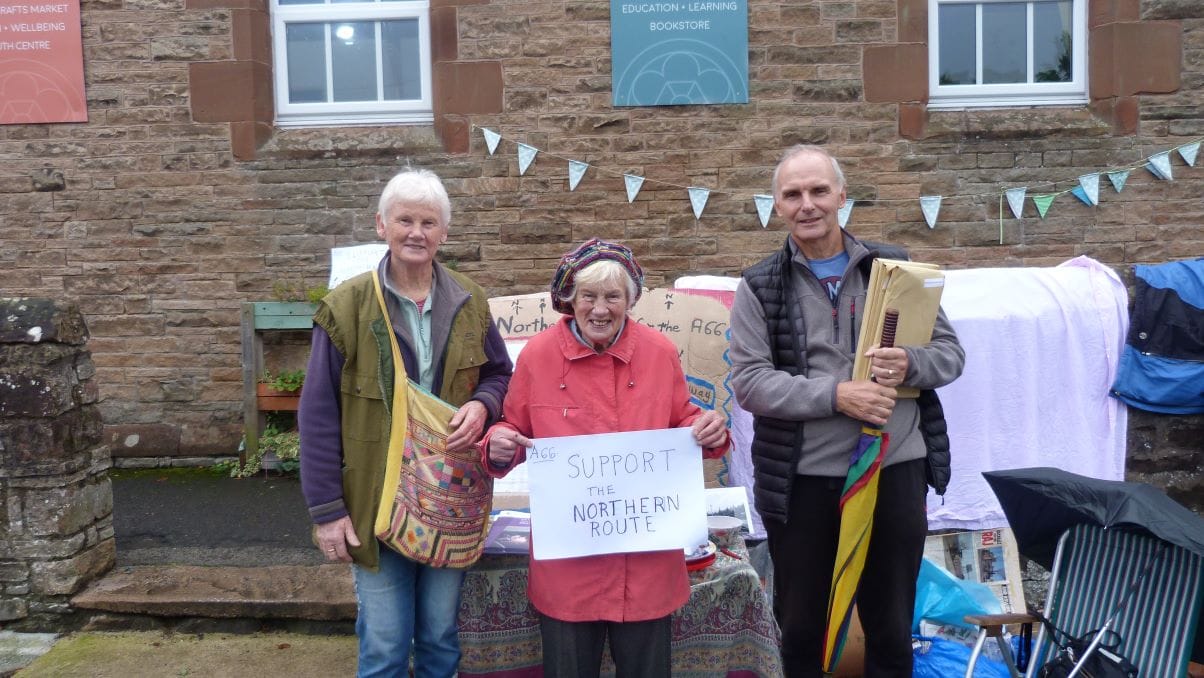 An 89-year-old Eden resident stood out in the rain to campaign for the Appleby section in Brough of the Â£ 1bn A66 upgrade to take a route north.

Joy Thompson was one of a number of activists who spent the afternoon outside the Hub in Appleby for a public consultation, hosted by National Highways.

Serious concerns were expressed over proposals to build the new two-lane road south of the current road, and protesters came from Crosby Garrett, Warcop, Musgrave, Dyke Nook, near Sandford, Appleby and beyond.

Passers-by have been made aware of the benefits of the new two-lane road between Appleby and Brough using a route north of the current A66, not south as currently proposed. People were encouraged to sign a petition on change.org for a northern route, which as of Wednesday had 690 signatures.

Ms Thompson, who was one of the organizers of the event, is expected to have a new four-lane road and an additional slip road built between her house, which has been in the family since 1950, and the existing road, with a new Highway 40 meters and a sink basin at 14 meters.

In addition, two 90-year-olds would find themselves living on the edge of a construction site, possibly for years, with a long-term increase in noise and pollution from heavier and faster traffic, said a campaign spokesperson.

She said: “This meeting shows the strength of local sentiment about the A66 northern route and the very real fears people have about the impact of the current proposals on their health, livelihoods and environment.”

Although 94% of residents of Warcop and Musgrave expressed a preference for a route north in November 2020, this option was not offered to the public.

â€œThe reason given by HE for not offering a route to the north is that it is forbidden to build on an Exceptional Natural Beauty Zone (AONB).

“The residents know, however, that the army field used for shooting is not beautiful, is not open to the public and is hidden from the road by trees,” said the spokesperson.

â€œDue to changing modes of warfare, the military may not even need it in the future, but by then the road will have been built south and another rare piece of campaign destroyed for our children and grandchildren.

â€œA road to the north could be a tourist attraction. In addition, there is no legal reason why an AONB cannot be built, â€she added.

National Highways (formerly Highways England), which offers the largest investment in the northern road network in a generation, is three weeks away from a six-week consultation on the latest designs for the Â£ 1billion project.

The public has until 6 November to express their views on plans to improve the A66 between the M6 â€‹â€‹at Penrith and the A1 at Scotch Corner, doubling the remaining sections of the route and improving a number of key crossroads.

And, in a world first for a project consultation, National Highways introduced innovative design firm Arup’s SoundLab technology, which gives people a unique opportunity to listen to expected noise levels and hear the sound of the road with and without the proposed improvements, such as special coatings and noise barriers.

Transport Minister Baroness Vere, who attended a demonstration of the SoundLab at the consultation launch event last month, said: â€œI am delighted to see National Highways working so closely with Arup on this technology. peak.

â€œThe A66 is poised to have a transformational impact on the region and I encourage anyone interested to get involved in this important consultation. “

The consultation will help National Highways prepare its application for a Development Consent Order which, if successful, will pave the way for the project to continue.