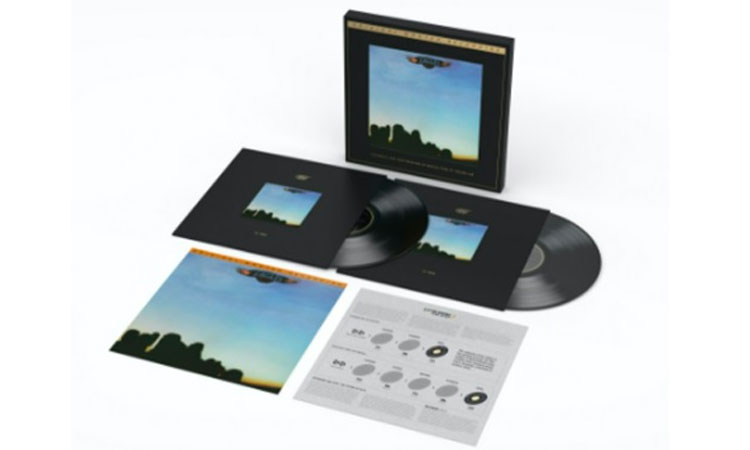 Mobile Fidelity Sound Lab (MoFi), a leading company offering the most advanced audio technology specializing in high-quality re-releases of key albums, is launching an unprecedented series that will feature all six iconic studio albums by the ’70s Eagles on the album. ‘One-Step Format UltraDisc, the world’s best vinyl records.

Strictly limited to 7,500 copies and pressed at RTI (Record Technology, Inc.) from the original analog recordings, the group’s first two studio albums to have sold in platinum, Eagles (1972), and Desperado (1973), will be re-released by Rhino Entertainment, Warner Music Group’s catalog label, on MoFi SuperVinyl, the most demanding vinyl compound ever. The Mobile Fidelity UltraDisc One-Step 180g 45RPM 2 LP Ultra-Hi-Fi Collector’s Edition pays homage to the importance of both albums and enhances the experience for generations to come.

“These records are classic for a reason, and they deserve to be presented in the best possible formats,” said Eagles catalog curator Richard FW Davis. “The MoFi process, with its purist, high-fidelity approach to recording the soundtracks to disc, represents a way to go beyond standard vinyl to bring a truer experience to the listener.”

Featuring premium packaging and beautiful presentation, UD1S album presses suit their extremely selective status. Housed in a luxury box, Eagles – available August 15 – and Desperado – available September 15 – will feature special stamped jackets and true-to-the-original graphics that light up the splendor of the recordings. Designed for discerning listeners who appreciate sound quality and production, and who wish to immerse themselves completely in the art and everything that is involved in the album, from iconic photos to meticulous finishes, the UD1S reissue exists as an artifact. conservation intended to be preserved, touched and examined. Playing with benchmark sounds that elevate an effort forever prized by audiophiles, these spectacular reissues deliver a crisp, clear, transparent, balanced and intimate take on the albums that definitely made 1970s California rock a genre in its own right.

Developed by NEOTECH and RTI, extremely expensive and extremely laborious to produce, MoFi SuperVinyl’s proprietary compound enables the creation of cleaner grooves that cannot be distinguished from the original lacquer and provides the closest approximation to what the label engineers hear in the mastering lab. Instead of using the industry standard three-step lacquering process, Mobile Fidelity Sound Lab’s UltraDisc One-Step (UD1S) uses only one step, bypassing two generational loss processes, while still offering the best sound quality.

To create UltraDisc One-Step, engineers at the Mobile Fidelity Sound Lab start with the soundtracks and meticulously cut out a set of lacquers. These lacquers are used to create a very fragile and immaculate UD1S tampon called “converted”. Delicate “converts” are then made into actual recording buffers, producing an end product that literally and figuratively brings you closer to the music, revealing a tremendous amount of additional musical detail and dynamics, which would otherwise be lost due to the process of recording. standard copy. The proprietary nature of these very limited presses ensures that each UD1S press serves as a pristine replica of the lacquer coming straight from the soundtrack.

“We are extremely proud that Mobile Fidelity Sound Lab has been chosen to work with the Eagles and Rhino Entertainment to produce the final versions of these six albums by one of the world’s most iconic bands,” said Josh Bizar, vice-president. president of Mobile Fidelity Sound. Laboratory. â€œOur team has developed technological advancements that allow our engineers to get the most out of the soundtracks, delivering the best possible sound presentations to music lovers and audiophiles. While anyone who loves music knows these songs back and forth, listening to these new remasters on our One-Step 45RPM SuperVinyl â„¢ format will be like hearing these albums for the first time.

Originally released in June 1972, the Eagles’ self-titled debut album played a significant role in changing the face of mainstream music while also creating a commercially dominant race that continued for nearly five decades. Expertly produced by Glyn Johns and with three massive hits – the rich harmony album that changed mainstream music includes “Take It Easy”, “Witchy Woman” and “Peaceful Easy Feeling” – the Eagles have created a band carefully refined, raised in Los Angeles. , country rock style that swept the nation and positioned the band to become superstars. The band’s second album, Desperado, remains a dominant influence on country rock and a crucial part of the development and evolution of the Eagles. With the brilliant title track and “Tequila Sunrise” – compositions that initially sparked Henley-Frey’s collaborative partnership, which spanned more than four decades – the longevity of the Desperado album reflects the endurance of its most famous songs. , which remain a staple in the band’s concerts to this day.

Founded by dedicated audiophiles, Mobile Fidelity set out to deliver faithfully reproduced high-fidelity recordings that would complement the many advancements in high-end audio streaming systems. Previous reissues include Blonde on Blonde by Bob Dylan, Kind of Blue by Miles Davis, The Nightfly by Donald Fagen, What’s Going On by Marvin Gaye, Brothers In Arms by Dire Straits, Abraxas by Santana, Nilsson Schmilsson by Harry Nilsson, Still Crazy After All These Years by Paul Simon, and the Tapestry by Carole King, among others.

The limited and numbered copies of the reissued LPs of Eagles and Desperado are available for pre-order on mofi.com and on musicdirect.com.

In today’s fractured and fashionable rock landscape, the Eagles retain an appeal that transcends both generation and genre, cementing the group’s role as enduring musical icons. As the best-selling American group of the ’70s and one of the best-selling groups of all time, the Eagles have sold over 150 million albums worldwide, scored six No.1 albums and topped the singles charts five times. They have won six GRAMMY Awards, were inducted into the Rock & Roll Hall of Fame in 1998, in their first year of eligibility, and received the Kennedy Center Honors in 2016.

Mobile Fidelity Sound Lab’s ongoing quest is to provide the best audio entertainment software that technological innovation can offer. From our first LP Original Master Recording vinyl to our latest Ultradisc UHR Super Audio CD, we have been and will remain a steadfast innovator in the audiophile frontier. We further believe that technological development serves best when accompanied by a deep awareness and appreciation of the elusive magic and mystery that make up music itself. Our greatest hope is that our products will serve as conduits for ears and souls to experience superior, pure and natural sound reproduction of diverse and preeminent original recordings across the musical spectrum. In response to the rapid advancements in recording formats and audio playback systems over the past few years, Mobile Fidelity has maintained its continued commitment to improving industry standards. This has led to the introduction of many innovations in the audiophile arena: Original Master Recording LPs mastered at half speed; Very high quality recordings (UHQR); high fidelity cassettes; consumer alignment devices for phono cartridges and audio cassette decks; Original master recording compact discs; the 24-karat gold-plated Ultradisc CD; Ultra High Resolution Ultradisc (UHR); and more recently, our One-Step 45RPM SuperVinyl sets. To this day, the independent company continues its commitment to exceed industry standards.