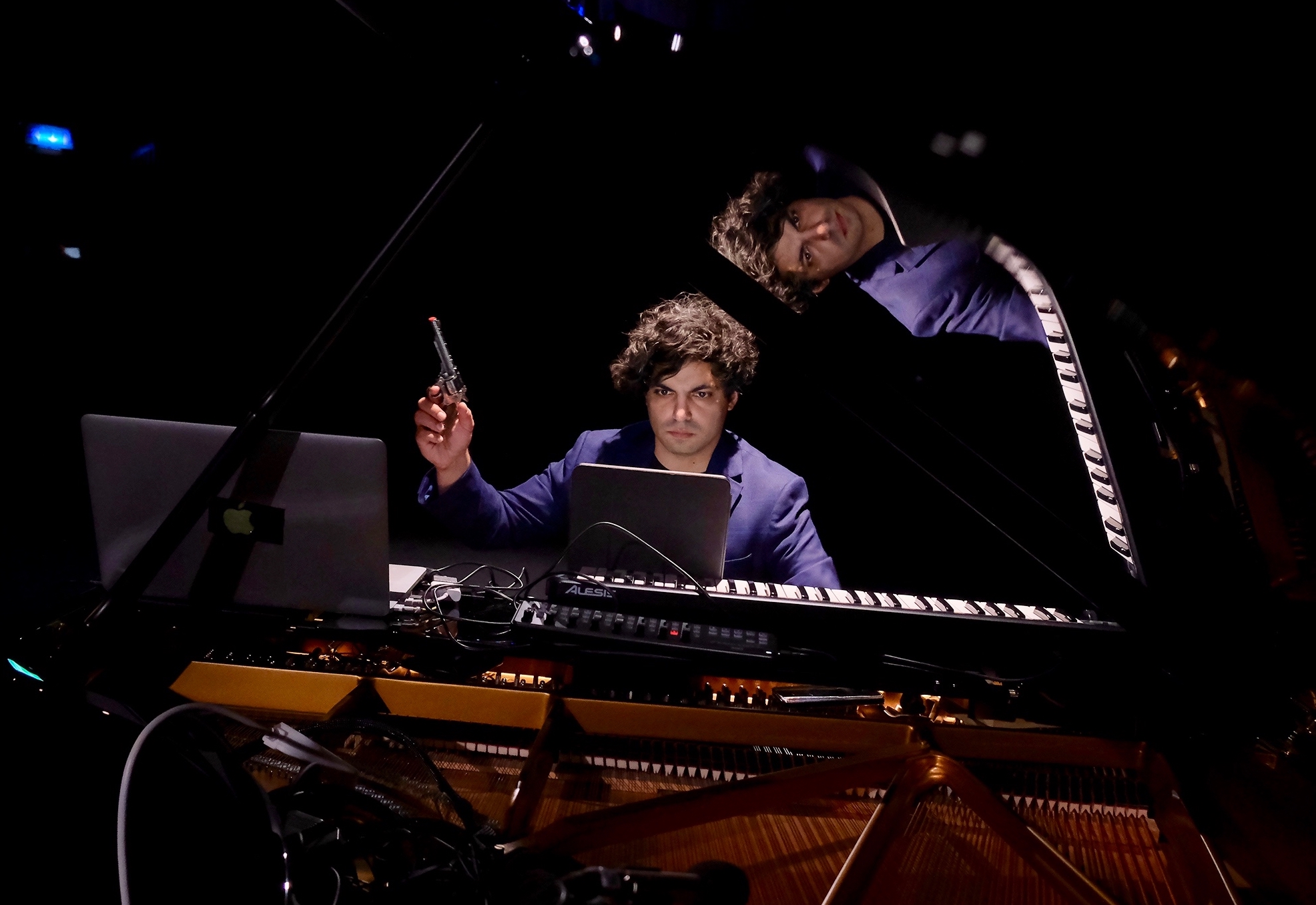 There was something intensely comforting about sitting in a dark, silent room, surrounded by the dark shapes of strangers, watching a performer grapple with technical issues. The sensation was more than the excitement of being back to long-postponed gigs; it seemed entirely consistent with pianist-composer Zubin Kanga and the Dublin Sound Lab’s approach to working with performance with electronics – laid-back cool, practical and transparent. For Kanga, the electronics are clearly not an add-on, but a fundamental part of working with his instrument, and the physicality of his performance a keystone rather than an afterthought. This program saw him interpret complex musical textures, bend over piano strings armed with electric arcs, speak, and perform physical actions like pretending to sleep and banging a shovel.

The program began with Alexander Schubert’s wiki–PIANO.REPORT. It is a kind of participatory collage work accessible via a website which can be modified by anyone, and performed “as is” at the time of performance. It moves quickly through fragments of scores written for piano, texts – “pogonophobia: fear of beards! – instructions for actions, electronic sounds, even videos of Kanga himself in previous performances. It produced a sort of unpredictable fantasy while maintaining an inexplicable integrity. One of the most interesting things about the piece was not just its random nature, but the way it weaved its own program note into its texture, including the performer’s reflections, where Kanga has discussed his own experience with the piece – including noting that it was the first of his performances that encountered technical difficulties. (As of this writing, there is still evidence of this technical mishap, in text that appears in the intro: “I still think that pause and reset was part of the play”).

Fergal Dowling Fake Piano was one of three works to receive its world premiere under the programme, alongside works by Michael Finnissy and Nicole Lizée (the other pieces, by Schubert and Scott McLaughlin received their Irish premiere). Fake Piano is a piece that directly explores the relationship between live performance and electronics; based on the Antescofo system developed by IRCAM, a programmed digital pianist “listens” to the live performance and responds to what he hears. The result is not so much a “fake” piano as a “ghost”, the counterpoint to Dowling’s intricate bursts sounding so natural and realistic. Fake Piano was followed by McLaughlin’s evocative title In the unknown, there is already a scenario of transcendence, a star of the program both for its complete shift in approach to the material, creating a moment of absorption in the sound, and for giving Kanga a chance to really shine through his simple yet expressive physical performance. For this piece, the piano strings were prepared (taking a few more moments which did not disturb the flow of the performance at all, thanks to Kanga’s comfort on stage), then played with bows, creating strange bells and evolving metallic buzz that played beautifully against the few piano notes struck.

The last two works in the program were both works with video components, but which use the medium in almost opposite approaches. Finnissy hammer keyboard (Part 2) with video by Adam de la Cour is a moving and sober reflection on the repressed and secret lives of queer people in the 1950s and 1960s, including that of pianist Sviatoslav Richter. Finnissy’s music reworked the movements of Beethoven’s ‘Hammerklavier’, separating the threads and weaving them again, just as de la Cour did with his material, fleeting fragments of body and movement.

by Lizee Scorsese Studies (part of her ‘Criterion Collection’) was much more playful, not so much by breaking and reworking its material – tiny fragments of the director’s meaningful films – but by reducing it to the essence of an aural gesture and visual, looping it before handing it over to the piano part to be reconstructed. We encounter a motif created from a momentary sonic tumult in the climactic scene of Taxi driveran accelerated pace of Matthew McConaugheysings in the wolf of Wall Street, as well as the physical interventions of the composer with her own hand through animations on paper. It was in this room that a shovel and a bucket were part, with Kanga not only responding, but almost taking part in a pivotal scene of Freedmen.

It is thanks to Kanga’s assurance not just as a pianist but as an interpreter of sound and action that this program has worked so well overall, a perfect start to a festival presented by Dublin Sound Lab, who continue to portray themselves as true innovators of new music in town.

Read a review of the last night here. To learn more about Music Current, visit www.musiccurrent.ie.