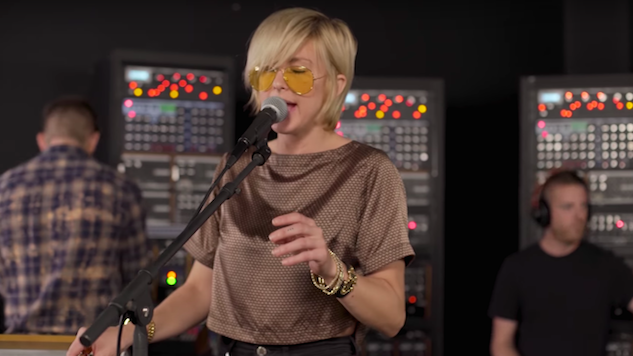 New York electro-rock duo Phantogram presents their new video exclusively at Dough, for a reinvented version of “Calling All” from their 2016 album Three.

The band performed the track live at the Moog Sound Lab in Asheville, NC, transforming the track by playing it completely with analog synthesizers. Guitarist Josh Carter uses a Minimoog Model D, while singer Sarah Barthel opts for an MF-104M analog delay to distort and deepen her vocals. While the new version is still a crisp electronic pop track, it has a much more skeletal feel than the track’s dense hi-fi original recording.

“’Calling All’ is about owning who you are,” Barthel said. Dough of the track. “Celebrate yourself. Love what you love and be who you are.

The group had previously performed at Moog Sound Lab in 2011 for a performance of their track “16 Years”, taken from their 2011 EP. Night life. Previous artists who have performed in the Moog Sound Lab include Tegan & Sara, CHVRCHES, Washed Out, Moses Sumney, Sylvan Esso, Toro Y Moi, Jack Antonoff and more.

Phantogram has a few upcoming West Coast tour dates slated for May, including shows with Tycho and California festival appearances at Napa’s Bottlerock Festival and Fresno’s Grizzly Fest.

Enjoy Phantogram’s performance from “Calling All” below, as well as Dough Cloud audio from their Daytrotter 2010 session and check out their upcoming tour dates below.