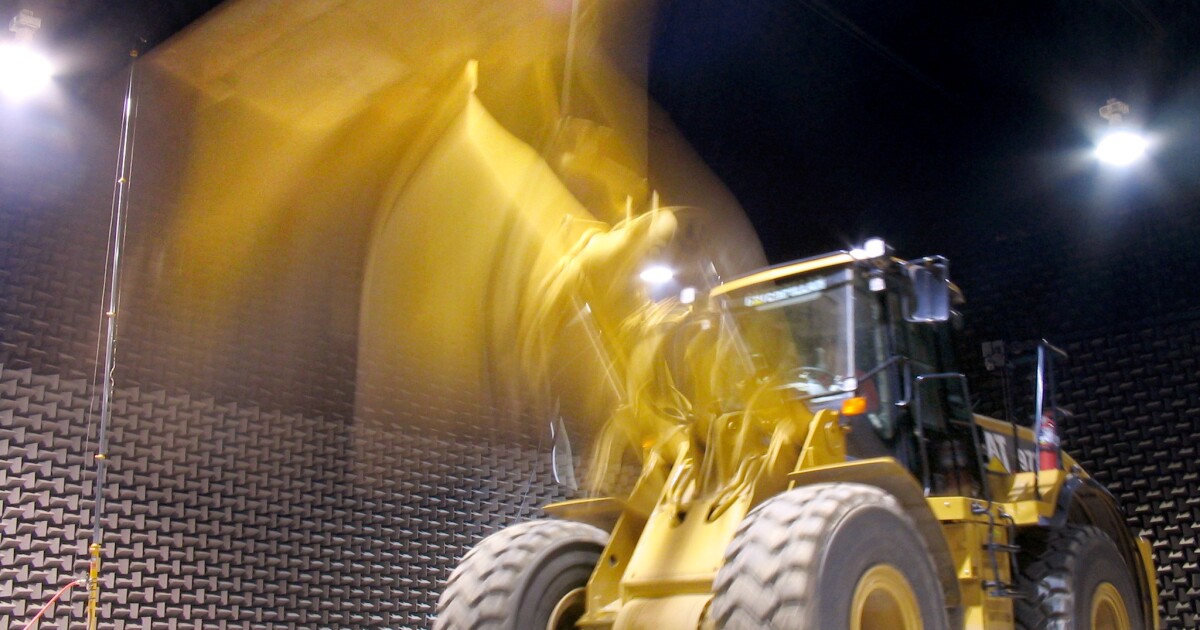 Inside Caterpillar Sound Labs, some of the quietest spaces in Illinois

Did you know that Caterpillar has two of the nation’s most advanced sound labs right here in central Illinois?

One is at the Mossville Tech Center; the other is on the proving ground in Washington. Inside these labs, engineers and technicians test machines and components to ensure they meet global noise emission requirements. They also use sound to troubleshoot, provide information to operators, and keep people safe around their machines.

David Copley is a senior engineer at Caterpillar Global Sound and Cooling. He says sound is an essential part of their machines and each component has its own unique sonic signature.

“In particular, any type of rotating machinery, whether it’s gear trains, pumps, hydraulics…they all have very unique signatures,” Copley says. “As a sound engineer working on Cat machines for almost 30 years, it’s a bit like a conductor can hear when the flute section is out of tune or can choose that oboe even if the percussion can be pretty. strong. That’s what we can do with some of our technologies.

Copley runs the Sound Lab at the Tech Center, which is made up of two very different sound chambers. One is a reverberation chamber. The other is a “semi-anechoic” chamber. Anechoic means “no echo”.

“Those two extremes allow us to make very precise measurements,” says Copley. “We can also use our computational models in these kind of ideal environments to correlate with these tests, which then allows us to do more realistic and validated computational modeling and design in virtual space.”

Inside the reverberation chamber, sound bounces off the walls and echoes. The room has hard concrete walls and ceiling diffusing panels that help disperse sound.

“If I want to know what’s called the sound power emissions of a device, and it’s like a light bulb, how much radiated power… I’d put it in the reverberation chamber. And I could measure the sound power very precisely because it integrates the sound together, because it bounces around.

The semi-anechoic chamber is located right next to the reverberation chamber. This room is so quiet you can practically hear the blood rushing through your eardrums. Foam wedges line the ceiling and walls and absorb any sound created within.

Listen to the impact sound of a hammer hitting a toolbox, first in the semi-anechoic chamber:

And here is the same hammer noise in the reverb chamber:

“So you can hear this decay happening in the reverb chamber,” says Copley. “The microphone, or in this case the listener, is basically the same distance in both cases. And I think that’s important to note because of the difference in sound between the two chambers.

Sometimes both chambers are used simultaneously, such as when wanting to measure the amount of sound that passes from one to the other. This is ideal for simulating the floor of a machine cabin, where noisy components are located directly below the operator.

“We can generate a lot of sound in the reverberation chamber, which will then pass through the floor of the cabin into the semi-anechoic chamber, where we can measure how much sound is going through and where it’s coming from,” says Copley. . “And so we can get an idea of ​​which parts of the floor need to be improved.”

Sound Lab at The Proving Grounds

Across the river at the Caterpillar Proving Grounds, a very different sound lab is used to test the entire machine after assembly. It is a large, open building with folding doors and some 43,000 sound-absorbing wedges lining the walls and ceiling.

“We can bring a machine into the sound chamber and park the machine in the middle, and we’ll close the folding doors. And then we have another additional interior door which is another foam wedge wall. And it will close, completely isolating the center of the building from the outside,” says Peter Zuehls, sound engineer at Caterpillar Proving Grounds.

“We do what we would call investigative or developmental testing, where we look at all the different sources of machine noise, try to bring them into harmony with each other so that the operator can use the machine effectively. and use machine signals to understand what he is doing, as well as to provide him with a pleasant working environment.

If a machine has a problem, customers can send Caterpillar an audio recording, and their engineers will listen and try to determine the problem. “We use the software in labs to identify sound and identify the root cause of noise,” notes Zuehls. “And then we come up with a solution to eliminate that noise.”

Here is the sound of a Caterpillar motor grader with gear noise:

And here is the same grader after it has been repaired:

“After identifying the noise, we would go back and apply a solution to the machine,” says Zuehls. “In this case it was a different set of gears with a slightly different profile, then test again and verify that the solution worked.”

When a machine component has a problem, the problem also has a unique sound. “Hydraulics, you can get pump whine; you can get valve slap. Undercarriage of a crawler tractor — you can hear the slap of the tracks from a long way off,” he adds. “Or if a wheel loader was working in a quarry near you, you might hear a back-up alarm. There are all kinds of noise sources on our machines. And the beauty part is that we’re working on all of that. As a sound engineer, you touch every aspect of this machine. »

Recently a customer had an issue with a D8 bulldozer making a loud noise in the cabin. Caterpillar engineers were able to identify the problem from the sound alone.

“He took it to the dealer, and they found nothing wrong,” recalls Zuehls. “So the dealer took a video with his cell phone. Engineers watched the video and were able to identify what was causing it by the frequency of the sound. And they knew where that frequency… what line the sound was going through the hydraulic system, and then they found where it would hit the cabin and create that noise.

A large boulder had gone through the landing gear and bent the wings in the cabin. “And they tried to bend everything, but they missed a line,” says Zuehls. “And that was the line that touched the cabin. And we were able to figure out what the problem was without ever seeing the machine.

Today, at Caterpillar, sound engineers have the tools and technology to troubleshoot remotely, and the ability to sculpt the very soundscape of their machines, from state-of-the-art sound labs located here. in the Peoria area.

And it’s the sound of a Caterpillar bulldozer starting up.