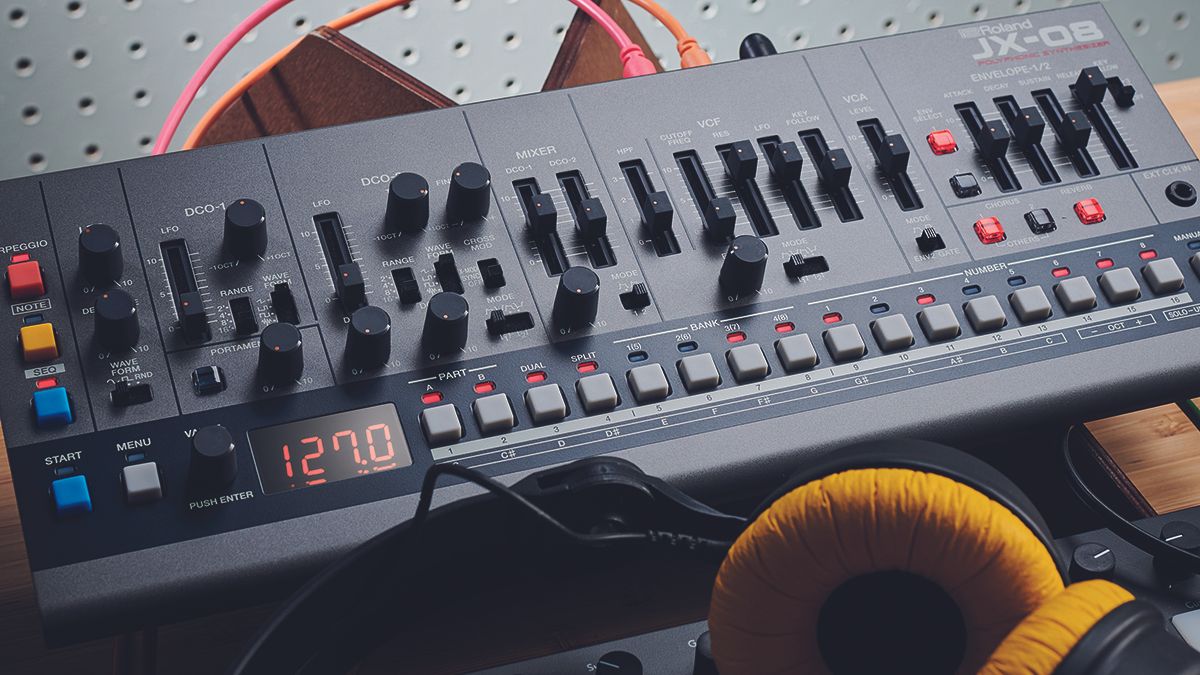 Roland JX-08 sound module: what is it?

Other manufacturers may borrow design ideas from classic models hardware synthsbut Roland continues on a software approach to resurrect its past glories.

In computing terms, these are covered by a host of plugins available as part of the Roland Cloud system. However, the DSP behind them has made its way into hardware products (and vice versa) in the form of its Boutique, AIRA and X lines.

Here we have the JX-08, a stand-alone synthesizer based on the 1984 JX-8P. It comes in the now standard Boutique desktop case, which can be mounted in a tilting dock or a 25-key jewel case. However, the synth does not require either of these to function.

You’ll need to consider your power options, because while batteries might be fine when you’re on the go, in the studio you’ll want to connect a computer or separate power supply through the USB-C port. When connected to a computer USB port, it also carries audio and MIDI, although there are also analog stereo headphone output (and mix input) mini-jacks on the rear. It’s also good to see Roland sticking to full-size MIDI jacks as well.

The front panel is loaded with a host of sliders, knobs and a simple LED display, and loses the two touch-sensitive modulation/expression sliders found on the now discontinued JP-08 and JX-03. There is also an analog clock input. As expected, the styling is consistent with the original.

When the JX-8P was introduced it was introduced as an upgraded version of the older JX-3P. Like the 3P, it had two DCOs per voice and six-voice polyphony. Unlike the more affordable Juno line, the dual DCO architecture allowed for a potentially wider tonal range, especially once you start using sync and oscillator cross modulation (which in the JX-8P was a form of amplitude modulation).

Just to remind you, DCOs are not digital oscillators, but rather digitally controlled oscillators, and therefore remain very pitch-stable (unlike their unruly VCO precursors).

• Roland Zenology Pro
The Zenology plugin included models of a number of classic Roland hardware synths, including the JX-8P.

• UVI UVX-10P
UVI has captured the sound of a huge range of synths to add to their sample-based instrument libraries. The UVX-10P includes the sound of the JX-10, MKS-70 and JX-8P.

• u-he DIVA
An excellent all-around virtual analog with custom modules to recreate the architecture and sound of many classic hardware designs.

This was certainly considered a good thing at the time – especially on stage – but gave them a reputation for a more clinical/predictable sound. However, that’s somewhat unfair and certainly didn’t stop the Juno-6/60/106 from becoming classics.

Each DCO can produce one of three waveforms, and they can be tuned/detuned over a wide range. There are independent pitch modulation controls for each oscillator (by one of the envelopes), with the mix balance between the two also providing this type of modulation.

Although the single LFO can be used to modulate the pitch of each DCO, there is no PWM (Pulse Width Modulation) option. It was, and is, considered to be the biggest omission from the JX-8P architecture, although the stereo chorus (derived from the Juno, but not exactly the same) helps provide an extra layer of warm blur.

The other omission on the JX-8P was more noticeable in a visual sense – there were few physical controls. Perhaps both to take advantage of the fashion for digital synthesizers (like the DX7) and to save money, the JX-8P featured a series of membrane-like knobs for parameter access. Fortunately, an external programmer (the PG 800) can be plugged in and placed on the synth for more direct control.

A similar system was found on the JX-10, which incidentally was Roland’s last true analog polysynthesizer (and employed two voice cards based on the JX-8P) and remains one of our favorites.

So what does the JX-08 bring to the table over the original, and is it a viable alternative?

Unlike the limited edition Boutique Jupiter-8 module, which had reduced polyphony compared to the original, the JX-08 can play up to 20 notes simultaneously, meaning that even when used in a patch overlay, it can still avoid cutoff notes.

You’ll also find an extensive effects section that goes beyond the two simple chorus choices of 80s gear and includes different types of chorus as well as delay, reverb, and other effects. Roland also saw fit to add arpeggiator and sequencer functionality.

Hidden in the settings menu (accessible via various button presses and rotations of the knob), it is also possible to allow the various controls to go beyond their original ranges, to adjust the so-called ” condition” of the unit (a type of artificial aging), and even specify three different types of low-pass filter.

On this last point, the manual is quite vague, but at least one of these options is closer to the Moog. These extras are certainly welcome – and go far beyond the original – so we can’t help but think that some way to add pulse-width modulation would have been a nice addition.

Sound-wise, and with the chorus disengaged, it’s very close to that of our JX-10, and capable of squealing a wider tonal range than some of the Rolands of the era.

The main frustration, besides the small size of the controls, is the lack of dedicated sliders for the two envelopes, which makes programming sometimes frustrating. Otherwise, it’s another welcome addition from Roland.

MusicRadar Verdict: Not the best all-around analog-style synthesizer, but the JX-08 has its own sound and is a worthy addition to the Roland Boutique family.

“It’s a cracking synth that does what the Boutique line does best, updating a vintage classic and unlocking its creative potential at a very reasonable price.”
JunoDaily (opens in a new tab)