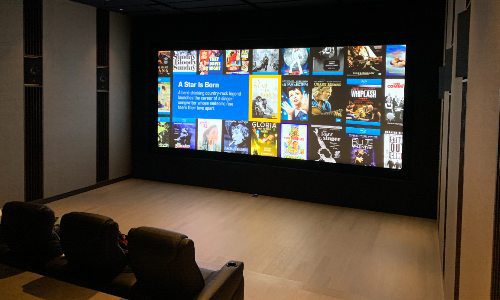 A long-time client of Texas-based AV integration company Sound Lab Designs entrusted director Ernie Blumenthal with the task of creating a theater in a house he was having built. The theater was meant to be made without compromise, with a specific desire for Dolby Atmos, and for it to take inspiration from Capitol Studios’ famous Studio C recording area.

Blumenthal and his client flew to Los Angeles to experience several of Capitol’s venues, with Studio C – the Dolby Atmos Music certified venue – immediately setting the benchmark for what he wanted his theater’s acoustic performance to be shaped.

Keeler, along with Maurice Patist, president of PMC USA Speakers, had previously updated the halls of the Capitol, including Studio C, which was redone in 2017.

Blumenthal and his team built the theater as a professional recording studio. Two acoustic access doors and the room-in-room construction completely isolate the theater from the house. As for the flooring, a 5 inch concrete slab rests on sound insulation cushions which in turn rest on the 4 inch concrete floor of the main house. The walls are separated by a space with acoustic treatments in between.

Keeler installed the interior to Veith’s specifications. Diffusers are positioned on the walls and acoustic treatments are suspended from the ceiling on wires which also create a beautiful visual element.

â€œAt 27 feet wide by 35 feet deep, 16-foot ceilings and tiered seating, the theater gives off an overall impression of grand. To keep it looking fresh for years to come, we opted for light-colored hardwood floors. This was not a problem given the amount of acoustic treatment applied to the walls and ceiling, â€explains Blumenthal.

The theater’s air conditioning system has been designed to be completely silent. A separate AC unit manages the equipment room, which houses the amplifiers and projector. A custom 50,000 watt isolation transformer with voltage regulation provides clean power to all equipment.

â€œWhen completed, the part was tested and exceeded all design specifications. At 110 dB of full bandwidth pink noise, there was a drop of almost 80 dB at all frequencies outside the room, â€notes Blumenthal.

The audio portion of the theater consists of PMC’s fully active speakers QB1-XBD as the front sector, the QB1 active speaker for the center, twenty-two Wafer 2 surrounds in a Dolby Atmos configuration and two subwoofers PMC XBD active rear used as an acoustic bass set to help tighten bass response in any position in the room. This is a similar but larger scale version of the PMC system used in Capitol’s Studio C. A StormAudio ISP 3D.32 ELITE manages the preamplification and immersive audio processing.

With such a focus on audio performance, the installation required a commercial-sized film screen that would not hamper the performance of the PMC speakers mounted behind while still providing benchmark video. It also needed the ability to adjust the aspect ratio up to 4: 3 for the owner who is a big fan of black films.

For this, the team turned to Seymour-Screen Excellence for their acoustically transparent Enlightor Neo 4K HDR projection screen surface framed in its Adjustable Ratio Theater (ART) motorized masking system. The configuration used is 22 feet diagonally with a native aspect ratio of 2.40. The ART is completed in this installation by a Digital Projection 4K laser projector of 30,000 lumens and an anamorphic lens. A Lumagen video processor was used for scaling and aspect ratio control.

Premium audio turns the theater into a personalized concert hall

Seductive to the owner’s audiophile, the rear of the theater features a premium VPI turntable, McIntosh phono preamp and custom stand.

Because the room is built like a recording studio, it is designed to play all types of music and movies, from mono to stereo and full surround. The location of the turntable has been carefully chosen so as not to have feedback from the speakers.

â€œThis 2-year project was completed in 2019 for a client owner who just wanted the best,â€ says Blumenthal. â€œThe overall cost of the theater including the equipment was over a million dollars and I would dare say that this studio quality theater really achieves the best sound and picture quality available today. , perhaps one of the best in America today. â€