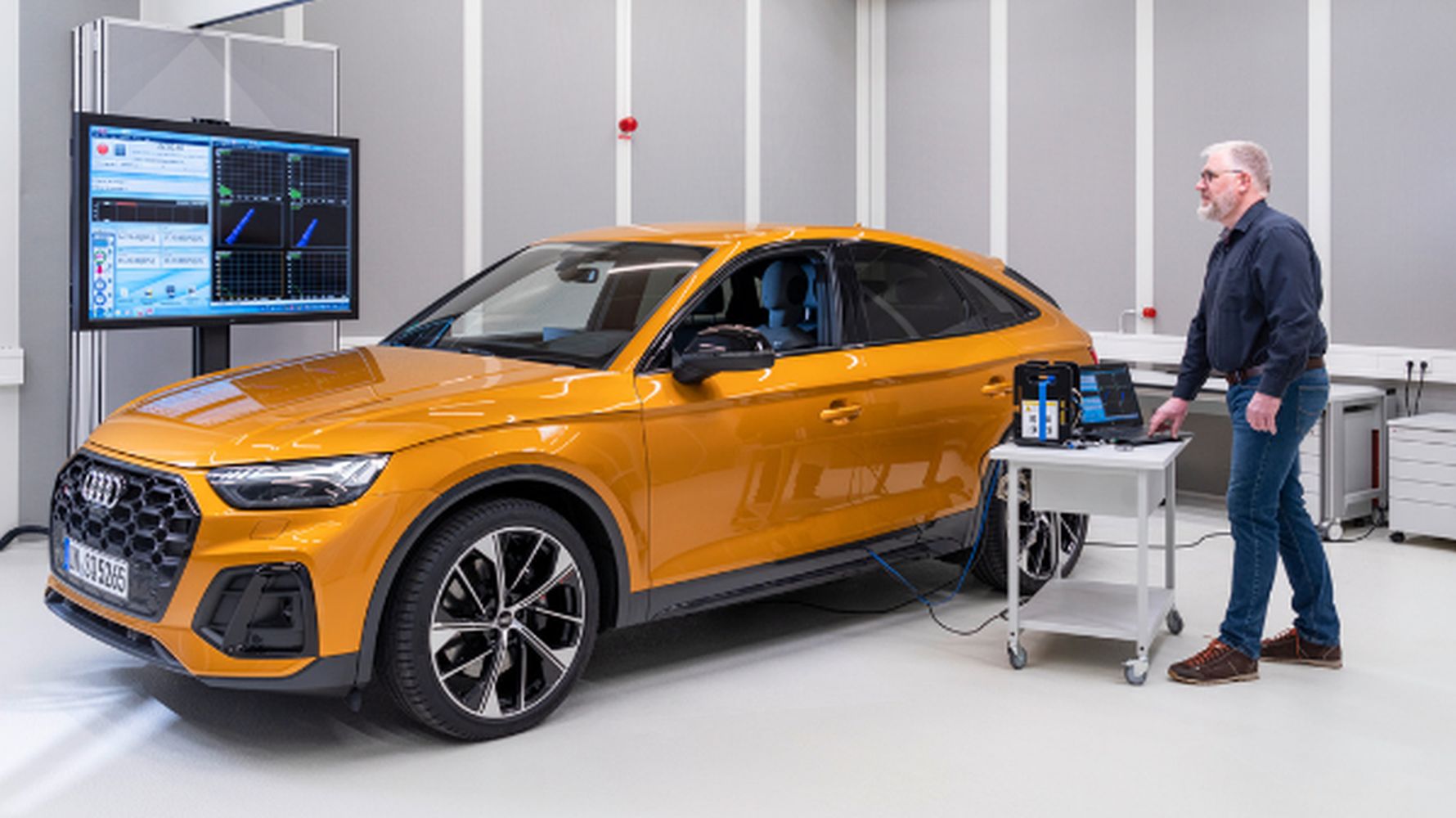 Considering sound and acoustics much more than the quality of infotainment, Audi strives to create a holistic and natural sound that is best suited to each model: At Audi, the sound of the audio system is one of the fundamental qualities quality.

Customers who wish to be in an exciting and inspiring environment inside their car are also extremely sensitive to sound. He wants an acoustic space where the background noise is not distorted and which contains signals, warnings and information that are harmoniously compatible with each other and discrete activation sounds.

So what sounds do people hear in the car and where do they come from?

This topic was discussed at a new technology meeting hosted by Audi under the name TechTalks events.

Background noise in an automobile is a mixture of a wide variety of noises and sounds. Such as engine noise, the usual driving noises caused by rotating tires on the road, and aeroacoustic noises caused by air flow in the chassis when the car is in motion. There are acoustic feedback sounds such as window automations which make a little noise, the door closing sound, warning, signal and information sounds, functional messages.

Audi deals with the issue of noise reduction inside the vehicle in a holistic way. The Rustle and Rumble team works together to this end, consisting of experts in the fields of automotive design, chassis development and quality assurance.

These experts test and evaluate each new Audi model with special devices and hydropulse equipment that provide the right environment for different road and vibration conditions. This special device, a four-point servohydraulic test stand that vibrates the car, is used to study and detect disruptive noises such as clicks and squeaks caused by vibrations at frequencies as low as 50 Hertz in the car. passenger compartment. Testing individual components or the entire chassis for vibration responses.

An electric motor causes virtually no oscillation, vibration or mechanical noise, unlike an internal combustion engine. In such an environment, previously imperceptible sounds may appear. This includes the noise the tires make when traveling on the road.

Audi goes to great lengths to minimize all of these disruptive effects as soon as they occur. For example, in the chassis of the Audi e-tron, all areas where annoying noise can be transmitted are specially isolated and separated. In other words, the openings and spaces related to the design of the case are filled with microfiber material. The floor is covered with a special material. Up front, the intricate multi-layer insulation row prevents noise from entering the interior through the front. A similar structure is located at the rear. The electric motors are enclosed in noise-canceling capsules. Even the flooring is designed to absorb sound. Foam carpet coverings inside keep the silence quiet.

Usually, wind noise becomes very pronounced when a car reaches a speed of 85 km / h or more. This noise remains at a very low level in the Audi e-tron and hardly ever gets inside thanks to the intensive and fine tuning of the door tires, exterior mirrors and water stop strips. Passengers can comfortably even at high speed. sohbet can. The car’s windshield is fitted with double glazing as standard. Audi is optionally available with acoustic glass for the side windows.

Actively increase or avoid sounds in the car

Active acoustic measurements have become even more important in recent years. For example, some of the engine noise can be reduced with Active Noise Cancellation (ANC). Based on ANC microphones placed in the roof liner and measuring the sound level inside, a controller reverses the disturbing sound waves and records the neutralizing sound through the subwoofer. However, actuators are also used in the exhaust system to emphasize desired sounds. Powerful speakers ensure that the engine sound has a dynamic effect as you want it to be.

How to experience a pleasant and non-disturbing atmosphere in a car: 3D sound

Sound amplifiers come into play here. They take care of all the sounds and, if necessary, adjust, remove or boost them to make sure that each sound contributes to the acoustic harmony in the car.

In addition to having many sources of noise, cars also have particular challenges when it comes to sound field: the number of passengers seated in different positions, the number of people inside, if they have a panoramic roof , whether they have fabric or leather coverings, and above all, the time it takes for sounds to travel from the speakers to the ears of the listeners …

The term 3D sound defines a sound that acoustically reflects the three dimensions of a space. When sound recording was invented, the sound was reproduced by a single speaker – mono. In the 1960s, three-dimensional sound began to gain wide acceptance: two microphones recorded music from different places, and when played, the recorded music was assigned to two different channels. Thus, a spatial sense of sound, a stereo effect was produced. The term “1-D” refers to this, ie stereo sound.

Therefore, â€œ2-Dâ€ stands for surround sound: this multi-channel technology has been in use since around the turn of the millennium. Music comes from a subwoofer and a few speakers in the front, back and sides – like 5.1 and 8.1, depending on the number of speakers. At this level, each sound effect is assigned to a single speaker or to a single specific speaker group.

In order to get 3D sound, an additional sound source that is not at the same level is needed. In the new generation of the current Q2016 model, which Audi presented in 7, it featured Bang & Olufsen audio systems with 3D sound. Thus, the interior turns into a large stage which gives the music the feeling of being recorded in the room. There is an algorithm behind this technology developed by Audi with the Fraunhofer Institute. The Symphoria 2.0 3D algorithm calculates information from stereo or 5.1 recordings for 3D and processes it for 3D speakers. In this sense, Audi uses the Bang & Olufsen audio systems, which include a digital signal processor, a powerful 23 watt amplifier with 24 channels with 1,920 speakers, at the highest level of configuration in high-class models.

Audi does not compromise on sound quality in the compact class either. On the contrary, it adapts the technical concept to the spatial conditions. The A1 model, for example, has four mid-range speakers that point vertically up the windshield and use the windshield as a reflective surface. In this way, high quality 3D sound can be achieved even in a compact class car.

Digitization and arrival of sound

Audi drastically reduces the variety of versions and the associated development time with the soundCUBE audio software solution it has developed. Audi is also virtually improving new sound solutions in its state-of-the-art digital sound lab. Using realistic simulations, experts adjust audio parameters for various series even before a prototype emerges. This allows the sound configuration of each seat in the virtual reference room to be analyzed to provide the best possible personal listening experience for each passenger at their most effective point.

The next big innovation

Audi’s sound experts are currently working hard in the sound lab on the holistic sound experience of tomorrow. Immersive 3D is at the center of the work. With traditional 3D surround sound, sounds are assigned to specific speakers according to certain algorithms. Unlike this channel-oriented system, immersive 3D audio is object-oriented. In such a process, the sounds of the audio files are already linked to metadata, which perfectly reflects the acoustic state during recording, containing precise information about how and where the corresponding sound is to be heard in real space. Immersive audio is central to all new entertainment experiences that wow all the senses. But in the future, people in a driving car will have all their senses to fully enjoy such sound experience when they can stop devoting themselves to the task of driving.

The next big innovation: the future deployment of the new, high-quality 5G broadband mobile communications standard. Until now, many people have used their smartphones in the automobile as the primary receiver for audio streaming services. Using Bluetooth, the recordings on the phone were easily transferred to the car. However, since the bandwidth of Bluetooth wireless technology is limited, it sometimes results in loss of sound quality. In the near future, Audi plans to use the car itself as a receiver for the first time, via the integrated SIM card and a high-performance receiver module for true multi-channel audio streaming. This is seen as another milestone for Audi sound engineers on the road to the future.

JavaScript is required for this slideshow.