Van Halen has its first six albums reissued on MoFi high-fidelity vinyl. Each album comes as 2 LPs on “ultradisc one-step” vinyl and mastered from the original analog master tapes. Each LP retails for $125.00 and can be pre-ordered on mofi.com. 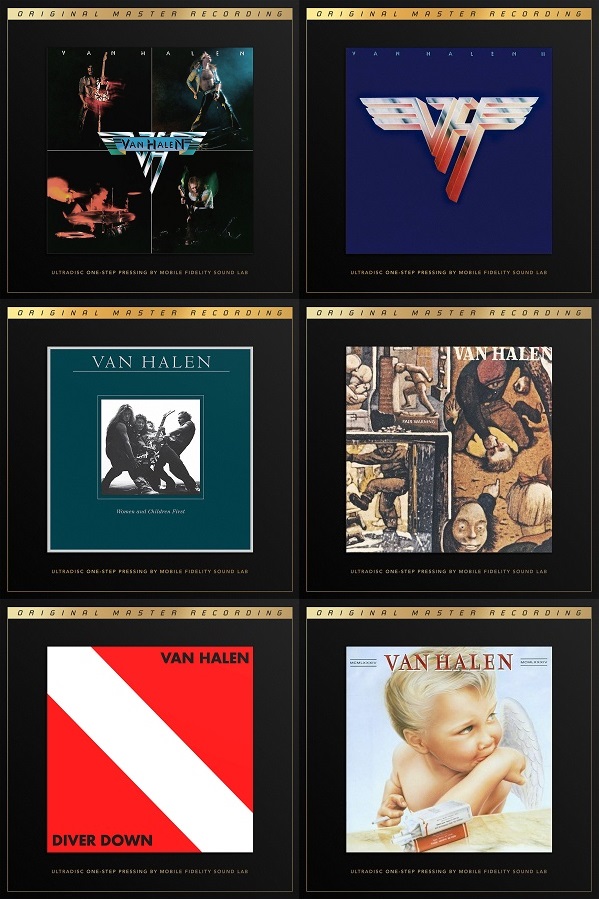 A description of one-step ultradisc vinyl:

“Instead of using the industry-standard three-step lacquering process, Mobile Fidelity Sound Lab’s new Ultradisc One-Step (UD1S) uses just one step, bypassing two generational loss processes. So that three-stage processing is designed for maximum performance and efficiency, UD1S is created for ultimate sound quality.Just as Mobile Fidelity pioneered Ultra High Quality Disc (UHQR) with JVC in the 1980s, UD1S represents again another state of the art advancement in the disc manufacturing process. MFSL engineers start with the original master tapes and meticulously cut a set of lacquers. These lacquers are used to create a very fragile and blank UD1S pad called a “converted” Delicate “converts” are then turned into actual record pads, producing an end product that literally and figuratively brings you closer to the music.

By skipping the extra steps of pulling another positive and an extra negative, as done in the three-step process used in standard pressings, UD1S produces a final LP with the lowest possible noise floor today. Removing the two extra stages of generational loss in the veneering process reveals enormous amounts of additional musical detail and dynamics, which are otherwise lost due to the standard copying process.The proprietary nature of these very limited pressings ensures that each UD1S pressing serves as an immaculate replica of the lacquer straight from the original master tape.Every conceivable aspect of vinyl production is optimized to produce the most perfect record album available today.